This map is one that has already been mapped for us and documented as the World’s Longest continuous walk without any ferries or flights. This map is undoubtedly the toughest to achieve out of all our maps. Firstly, it is the largest by far – over 5,000kms more than any of our other maps. Secondly, the distances between some towns are very large, with a lot of vast space along the way. Being a pre-determined route, we didn’t alter it to include more towns or more attractions to suit us; we followed the journey exactly “as is”!

Register to run the world

Botswana has a landscape defined by the Kalahari Desert and the Okavango Delta, which becomes a lush animal habitat during the seasonal floods. The massive Central Kalahari Game Reserve, with its fossilized river valleys and undulating grasslands is home to numerous animals.

Zambia is a country of rugged terrain and diverse wildlife, with many parks and safari areas. On its border with Zimbabwe is the famed Victoria Falls – indigenously called Mosi-oa-Tunya, or "Smoke That Thunders" – plunging a misty 108m into narrow Batoka Gorge.

South Sudan’s vast plains and plateaus are drained by the Nile River and its tributaries. This river system runs from south to north across the entire length of the east-central part of the country. At the heart of the country is a clay plain, the centre of which is occupied by an enormous swampy region known as  Al-Sudd (the Sudd).

Egypt dates to the time of the pharaohs. Millennia-old monuments sit along the fertile Nile River Valley, including Giza's colossal Pyramids and Great Sphinx as well as Luxor's hieroglyph-lined Karnak Temple and Valley of the Kings tombs. The capital, Cairo, is home to Ottoman landmarks like Muhammad Ali Mosque and the Egyptian Museum.

Kazakhstan extends from the Caspian Sea in the west to the Altai Mountains at its eastern border with China and Russia. Its largest metropolis, Almaty, is a long-standing trading hub whose landmarks include Ascension Cathedral, a tsarist-era Russian Orthodox church, and the Central State Museum of Kazakhstan, displaying thousands of Kazakh artifacts.

Russia spans across 2 continents - Eastern Europe and Northern Asia – and is the largest country in the world by area, encompassing one-eighth of Earth's inhabitable landmass. Russia extends across eleven time zones and borders sixteen sovereign nations, the most of any country in the world.

Tynda is Evenki's word related to "flat river bank" or a "place for grazing of deers". The town has a river with the same name, separating the town from the railway station. The 16-floor apartment houses in the centre and wooden barracks in the suburbs are two contrasts left over from Communist times.

Magadan is one of the few ports in this remote part of Russia, kept open over winter by resident icebreakers. The town is quite isolated - there is no railway, and you will travel on the only road into town. Once you have reached your finish line you should definitely walk on the ice of the sea - it is a rare experience! 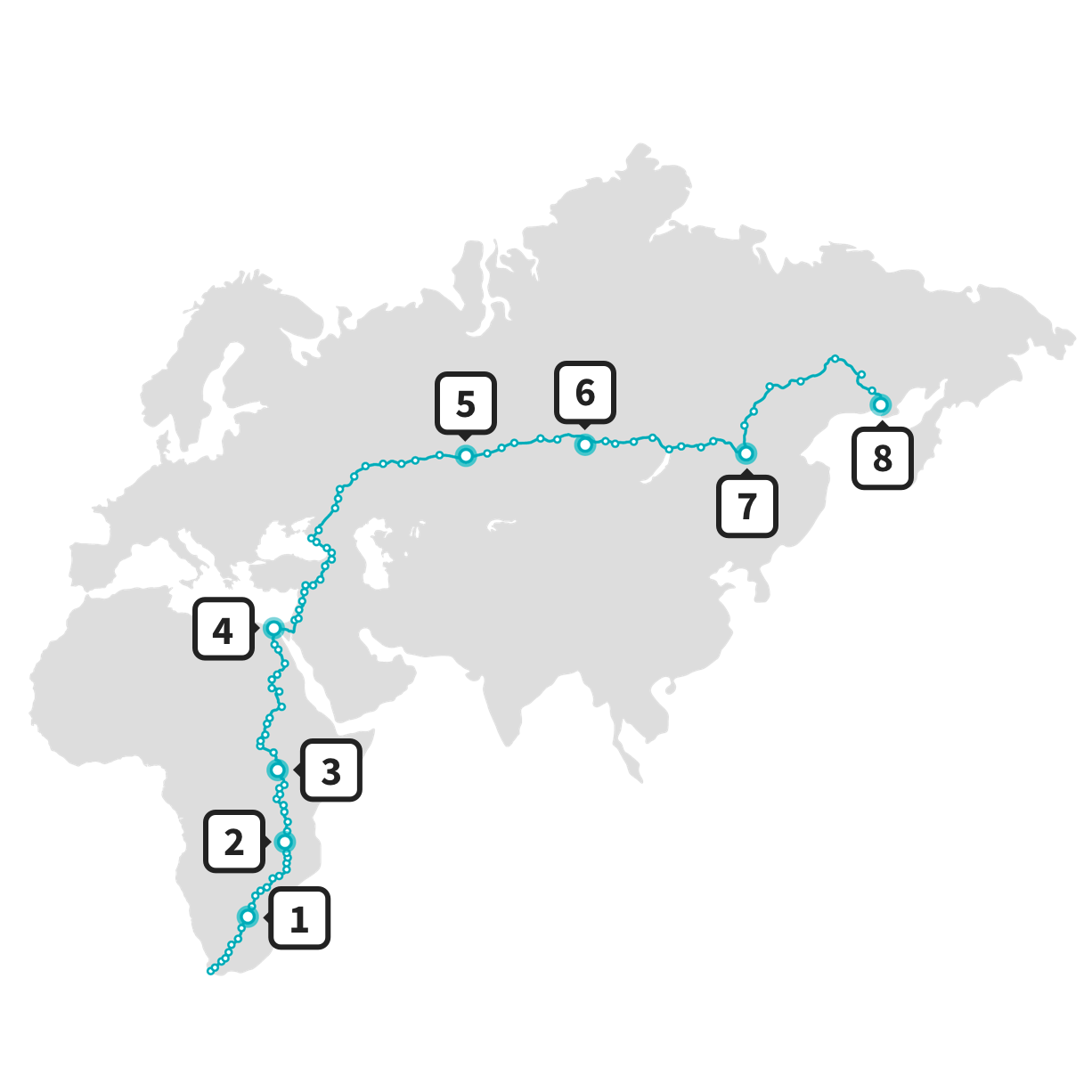 Dave Kunst was the very first (verified) person to complete an entire circuit of the earth on foot. Beginning in June 1970, Dave left on a journey that would take him across Europe, North America, Asia, the Middle East and Europe. He walked 14,450 miles total in just over 4 years.

Steven Newman – is listed in the Guinness Book of Records as the first person to walk around the world solo. Steve crossed 20 countries and walked some 15,000 miles during his four-year journey.

The official record of “first woman to walk around the world” was taken away from Ffyona Campbell when it emerged she “missed a few miles” of the journey during the USA leg of her trip. Nonetheless, she completed a walk of 20,000 miles, crossing the USA, Australia, Africa and Europe in the space of 11 years. She has since made up the distance missed in the USA, although she cannot reclaim her lost record

From Tierra Del Fuego to the northernmost part of Alaska, George Meegan walked 19,019 miles in 2,425 days (1977-1983). He holds the record for the longest unbroken walk, the first and only walk to cover the entire western hemisphere, and the most degrees of latitude ever covered on foot.