On the 25th April, Jill sent me an email with details for her finish of Run Down Under. On the 10th May (Mothers Day) it happened. Read both her before and after emails - a special moment not to be forgotten.

"I can’t quite believe I am nearly there! Not long now. In our previous life, I had been trying to coordinate finishing with running the London Marathon as part of the World Marathon Championships (for old people!) that should be happening tomorrow – though with all the will in the world I was never going to quite make it in time. It would have been so extra special to be able to finish in my very own uni city that I spent so much time in all those years ago (mainly running from pub to pub, or nightclub to nightbus!) Instead I will be doing my own longish run tomorrow here in Bendigo  (probably not the whole marathon distance though).

I am quite new to parkrun, but after starting on New Years Day this year I quickly became hooked, and I would really love to run one of our two local parkruns to finish – though I’m not certain that they will be back up and running by then either.

I have 3 of my 4 children back home from Uni due to isolation, and it would be the next greatest thing if I could get them to join me for the final few kms – though not even sure if more than one of them will be allowed to be seen running with me by then! So I guess that is the plan at the moment – running the last few kms with my 3 sons – preferably at the local parkrun but if not somewhere around home in Bendigo. Hubby can sort out some bubbly chilled refreshment for when we get back!

I have really enjoyed the whole Run Down Under experience in my new adopted country. The experience has incorporated 10 marathons across the world including the 6 majors, numerous half  marathons, innumerable shorter races and fun runs and hours and hours of training runs, mostly at silly hours of the morning before work. Quite a running history in the circuit around Australia.

At this point in time in particular I am feeling particularly far away from friends and family back home – so I think I may just return home for the next journey for Run UK and Ireland.

Thank you very much, Travis, for creating such a great fun and motivating idea for us all to enjoy. The updates and town summaries, and messages of encouragement really have made me feel as though I really have travelled through this fabulous and beautiful country on foot. A really incredible experience. A big hearty Cheers.

"Really proud to finish at last! Coincided beautifully with the virtual Mother’s Day Classic. Two of my boys got up and ran with me in the beautiful cold Bendigo Mother’s Day morning today. We chatted and laughed and had a little cheer when we virtually reached Sydney. Pleased with this achievement. This quest has mainly involved running near home, but has also taken me around the world - becoming a 6 star Abbott World Marathon Major finisher and qualifying for the inaugural Age graded World Marathon Championships which was supposed to be held in April in London this year - and hopefully will still take place at some point.

I’m now off to register for my next running journey - back to the mother country."

Some of you will recall Carla's incredible incredible Lands End to John O Groats Record that she achieved earlier in July this year. Carla explains... 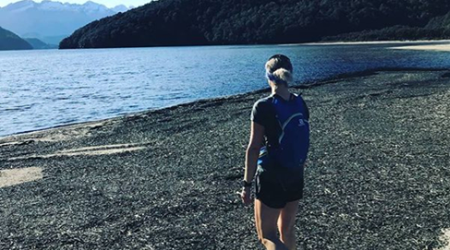 Wishing one of our Run New Zealand members, @brooke_bt_thomas all the very best with her 3006KM adventure of the Te Araroa trail from Cape Reinga...