Rachel Allworth is the founder of Rachel's Runners and coaches runners at all different points in their running journey. Rachel classes herself as a recreational runner, and by no means elite, but in in her relatively short time has done a lot... from 5km - 100km. Earlier this year Rachel sustained "conscious Ventricular Tachycardia". This is her story on the changes that have occurred as a result, and her dedication to finish her lap of Australia.

"I’m so happy I made it to Batemans Bay on my birthday today! Originally I was as working towards finishing my Run Down Under journey today but it was not to be after my sudden heart issue almost 6 weeks ago. 😣 Not sure how much you know but I do know Sheree got in touch with you after the paramedics had to cut my RDU shirt off me during that episode - thank you so much for replacing it. 🙏

Basically what happened was I had a sustained conscious Ventricular Tachycardia (VT) & my heart was stuck at 266 bpm when ambulance got to me. They had to reset my rhythm - I almost died. 😢 I then spent 10 days in hospital undergoing tests. Initially all tests showed my heart was strong & arteries all clear, but final test showed a genetic condition called ARVC & I ended up having defib implanted in my chest!

So, I am not allowed to run again or do anything apart from nana walks forever more BUT I’m so lucky to be alive to celebrate my 46th birthday today.😍

As for my RDU journey, I will finish this week. Although not today on my birthday as originally planned nor in the Top 100 as I’d hoped for, but I WILL finish & what a celebration that will be! My running group has been organising me a finish party for Saturday. I’m going to walk one of my fave local trails called The Ridge Track & have a Rachel’s Runner’s cheer-squad along the way & at the finish line. Can’t wait - it’s going to be so great! 🥰

Thanks so much for keeping me motivated along the way and I'm thankful I’m still here to get it done. 💓" 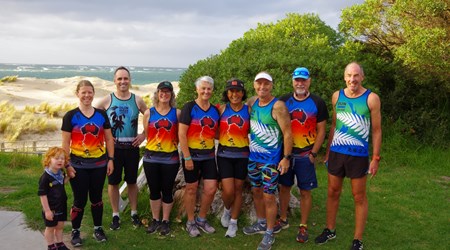