Our first member of the month for 2017 is Carol Gilmour from Mortlake in Victoria. Carol has been a member since December 2014 and in that time has run and walked 2,347km to now be on the stretch between Longreach and Winton in QLD, on her journey with Run Down Under. 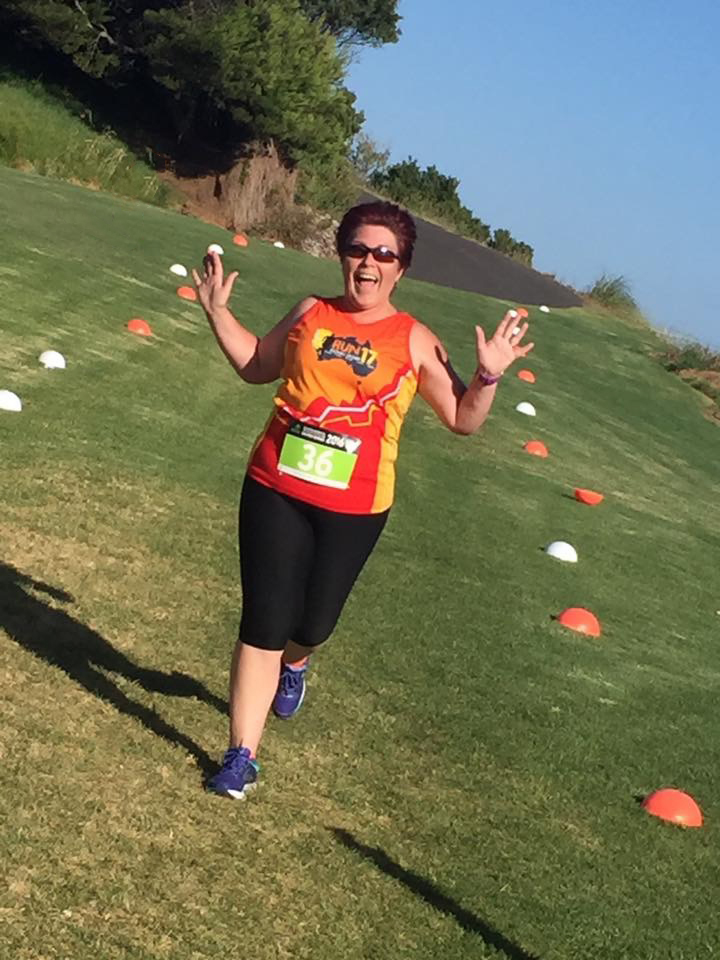 The first thing I wanted to know from Carol is when did she start running and why? I presumed from her involvement with her Club and her passion for running that it must have been a part of her life since early on, but it wasn’t the case as I found out. Carol tells me….. “In May 2012 I started what I would call my final weight loss campaign after yo-yo’ing with weight my whole life. I signed up to Michelle Bridges 12WBT (12 week body transformation) and I soon realised it’s not just about weight loss, it’s about being healthy for the long term and it’s since become my life. As part of 12WBT we would do a weekly 1km time trial as a measure of progress. I couldn’t even run round the back yard in one go to start with, I mean really, who would run when they could drive a car right?  Steady progress as the weeks ticked along, the weight started dropping and I started to do a bit more of this crazy thing called running, even when it wasn’t time for the weekly time trial, I was actually running  for fun, fancy that. In January 2013 I signed up to my first official 6km fun run absolutely terrified.  Weeks before I would drive 6km and think I’ll never run that distance. But I did and was hooked.”

So what is it that you most love about running? What is the attraction I asked? “A sense of achievement” Carol says proudly. “It surprises my family that I’ve actually stuck with it. I feel so proud of myself clocking the kms, longest runs ever, ticking off training plans, completing goal events.  I love the sense of belonging to a community greater than I could have thought.  I’m slow, a plodder, back of the packer, and yet I’ve never felt any shame in that, I’m supported and encouraged and cheered and that speaks volumes of this community that we’re all a part of.  I also love the friendships I’ve made, people I would never have met if not for running and they’ve become some of the most valued people in my life. I have a hugely supportive husband who if I’m running after work will make dinner for us. He makes sure I keep accountable to any training plans up on the fridge and the fact he is now running he “gets it”.

So was there any running as a kid Carol? “Sport what was that” Carol laughs. “I would do anything to get out of school sport. Which I guess is why “bling” is so important to me now. It’s not just the event, it’s all the hard work a person has done leading up to running the distance, whatever that distance may be. It’s great to see more and more races offering this very treasured memento.”

Carol is one of those members that is “involved” with Run Down Under at the highest level. She is constantly promoting us, is an active member of one of our biggest Clubs, and is committed to her own journey, so I wanted to know how she found out about Run Down Under and what made her join? And how she uses her 12WBT Club to assist with her journey.

“You know thinking back I’m not sure how I got involved” Carol contemplated. “I think it was someone in the 12WBT Runners Connect group that had done it that first year mentioning it. I loved the idea of “running  around Australia”. Before that I’d often tell my husband how many kms I had on my Runkeeper total for the year and he’d tell me I’d run to Geelong, or I’d be around the outskirts of Melbourne. To have something like that in a formalised sense and because I just love data was too much to ignore.  I joined up in RDU’s second year and have been a member since”. Carol goes on to tell me “I love checking our team leader board because we’ve been having some great friendly tussles behind the scenes amongst our members. The new website is fantastic, loving all the data it gives about our journeys, especially once you’ve hit the second and subsequent years to see a comparative from those previous years. I Love making it to new towns. How often I’ve synced my run then realised how close I am to the next town which meant I went out and did a couple more blockies!

The ‘12WBT Runners Connect’ group is an online group formed in August 2013 through Facebook and was started by Donna Keough with members made up from men and women who have done Michelle Bridges 12WBT and have fallen in love with running. We are all at different stages from running our first 1km in learn to run programs to Ultra Marathons. We are from all over Australia and meet at events far and wide. So many incredibly strong friendships have been formed from people who have met through this group and all through the love of running. One of our favourite things is to read our race recaps, it’s fantastic the camaraderie and support given to all our members. Our group on RDU is made from our members and partners and seems to be growing each year as more and more of us extol the virtues of RDU, with a lot of friendly banter behind the scenes as we move up and down the ladder. Funnily enough the humble cow has become our mascot, we love anything cow print, as evident by our club logo.”

So what hat has been you most memorable run as a runner Carol…..and where do you draw your inspiration from?

“I think Great Ocean Road 2016.  The half marathon at 23km was my longest run ever.  Mother Nature decided we would earn that medal on that day and she threw everything at us. We just didn’t have to contend with rolling hills, the sunshine soon turned to 35km/hour headwinds, add in some wicked cross winds, then the most glorious rainbow soon made way to rain. It bucketed down with 5km to go. The hardest event I’d ever run, the toughest conditions I’ve had to endure and yet I’d do it all again in a heartbeat. Roll on 2017!” Carol explains that her inspiration is gathered from….. “My very young grandchildren. I want us to live long and healthy lives for them. I have this scenario in my head that I’ll be at one of my grandchildren’s sports days and they’ll nudge their friend and say “see that lady, she’s my Nanna, and she runs marathons”.

Do you train alone or with a group Carol? “I live in Mortlake, a small country town in south-west Victoria and I train alone either in town or around the area, sometimes going running with my “fair weathered” running husband.   I’m lucky enough to work in Warrnambool so my week day runs are usually after work around the beautiful coast line. But 99% of my training runs are alone. During the Winter Season I am a member of the Warrnambool Athletics Club, best thing I ever did was join this group, we have a running calendar based on a handicap system, so for this “back of the packer” it’s great finishing with a group of other runners making a dash for the finish line.” Out on the country roads with only the cows and sheep for company is my favourite run. I quite enjoy out and backs, or running from one town to the next (then getting hubby to come get me!!) and of course the beautiful running course along the Warrnambool coastline. I love the long distance.  I love being out there on the road running for a couple of hours. I hardly use music any more either, so it’s me and my thoughts and the cows for company!  So it goes without saying I love the half marathon distance, having last year completed my eighth.

Carol’s running motto……. “Just keep running.  One foot in front of the other. 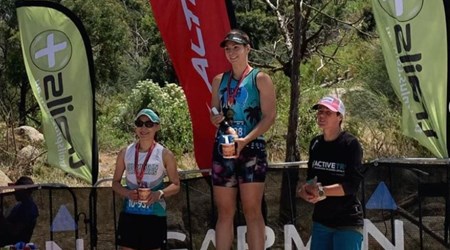